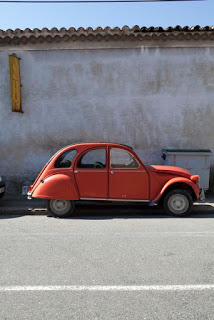 The red car that lives in front of the winery

We were visited by the bottling man.

It wasn’t a surprise; it had been planned for awhile.  We bottle on days when the lunar calendar says that the aromas of the wine will be at their most expressive.  Woo woo certainly, but who knows, it can’t hurt.

The bottling man’s arrival is always a big moment.  We have to make sure that we have eveything ready so all is aflutter the day or so before he comes.  He leaves Bordeaux at 3 in the morning to be at our winery at 7am so we’re jerks if we’re not ready.

Back in the day we used a small 4 bottle machine that was  entirely gravity operated.  It took FOREVER.  Now that we have  little bit of wine to bottle, say 8,000 bottles (that’s what we did this time) the bottling man is considerably faster.   Faster  by say 6 times. Picnic at the winery

The first time the bottling man came he literally threw the bottles into the storage boxes.  Maybe “throw” is a little exagerated but he was NOT gentle.  I learned that wine bottles are actually very strong.   He would put 6 bottles in a storage box at a time.   At lunch he talked about the places he had bottled.  The man had bottled Super Tuscans – and Bordeaux Grand Crus Classés.   It suddenly occurred to me that the bottle thrower was bottling some of the most expensive wines on the market.

I asked him, “Do you throw the Super Tuscans too?” and he said “a bottle’s a bottle, I treat them all the  same.” Mystery! What is that bottle? It looks like something new… The mystery bottle from below. More on that when it has a label.

This time Lydia was there to document the experience so the photos are better than usual.  Thanks, Lyd.