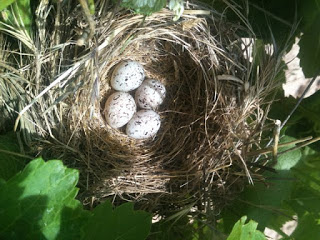 All obvious bird references aside…

I have come across many a natural marvel in the vineyard – while doing some repetitve task or another – but this is the first time I have scared a mother bird off her eggs as I went by (she flew back after I was gone,  I’m not a monster).

This was in a little Syrah, “La Bade” where I was working with Didier and our 15-year-old nephew, who, seeing me doing an elated bird’s-eggs-dance-of-joy calmly said, “Do you want my iphone to take a picture?”

I love Jeoffrey for being an unimpressed teenager and for thinking of lending me his smartphone.  I have no cell phone.  I have a landline – cordless – but still plugged into the wall, because deep down I subscibe to a movement of my Uncle Richard’s invention called “early man”.

Didier has the “farmer’s phone” – all of our friends who work in agriculture have one.  – It’s uncomplicated, indestructable – and it’s red -fancy farmers! What it really has going for it is that it’s waterproof so you can drop it in a wine vat, fish it out, dry it off and make a call to tell people about it.

That said, the bird’s nest picture – with it’s millions of pixels – is being published today thanks to a really cool teenager who had the LATEST technology in his pocket.  (Okay he took a month and a half to send me the picture – but we’re not counting.)   I’ll come around to technology… but for now – EARLY MAN!